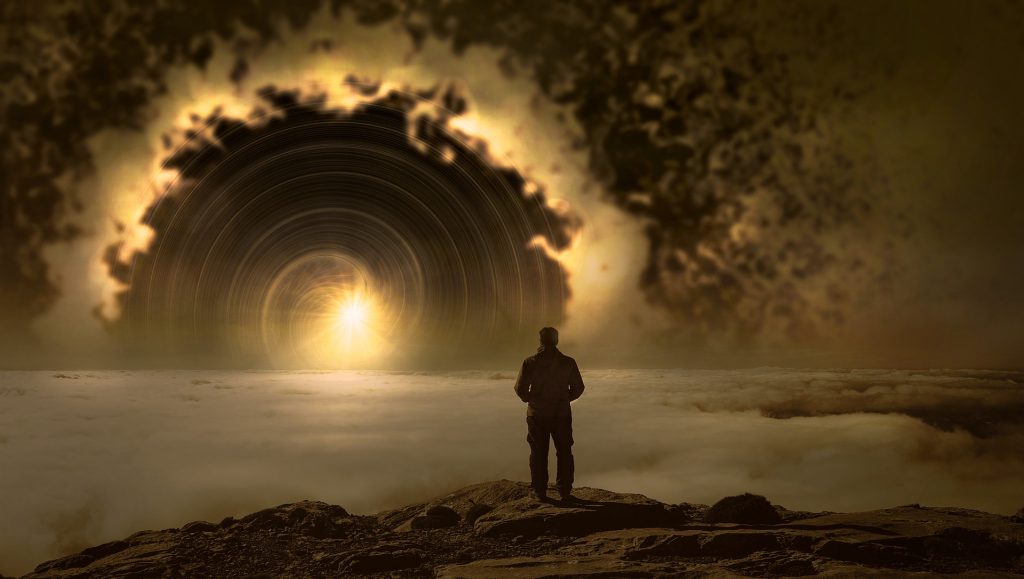 Some of our most important moments in life came about because of a chance encounter, a serendipitous discovery or highly improbable synchronicity. While all of those have something magical about them and we are left with a sense of grace of gratitude, they may be not that supernatural after all. This article explores how you can actively (consciously) create your life in a way that these forces work in your favor.

This is the first blog post of a series on “Inner Technologies of the Future”.

Do you remember your last serendipitous encounter? A person you met in the most unlikely place and who was yet just the right person to meet in that moment? Or that breakthrough discovery that you found accidentally after having almost given up the search?

We all have these experiences that we would categorize as luck, serendipity, synchronicity, chance or at least grace. Many people interpret them as messages from the universe or omens. These experiences can even be overwhelming to make sense of and in severe cases lead to paranoia or fear of psychosis since they can be so beyond our normal experience of linear logic. They are trans-rational, meaning they cannot be understood from a merely rational standpoint of view.

In this article I want to focus on the positive aspects however, since they can lead to unexpected opportunities. They also help us to move into a knowing larger than just our rational mind. This knowing comes from a more holistic understanding which includes our bodies and intuition.

Due to my inborn curiosity and my passion for consciousness development and coaching I began to dig deeper into synchronicities in search for universal principles. And I actually found some patterns that helped me understand how to create the circumstances that increase the probability of these effects.

Synchronicities – Moving Beyond The Axiom Of Causality

The term synchronicity was coined by analytical psychologist Carl Jung. According to Wikipedia, synchronicity is defined as “acausal connecting (togetherness) principle,” “meaningful coincidence”, and “acausal parallelism.” Jung believed, that events can not only be connected by causality but also by the meaning we give them.

His famous example features a client who reports a dream about a golden scarab. In just that moment a scarabaeid beetle comes flying to his practice.

If you explore this phenomenon in depth, I also highly recommend to check out this podcast episode of Future Thinkers (which I also recommend in general) on the science behind synchronicities.

While it sure is a fascinating angle, I don’t want to expand on the scientific research but rather on it’s practical aspects here. In the following paragraphs I will not further distinguish synchronicities from luck, chance, serendipity or whatever word you want to use to rather focus on the principle behind all of these.

If you have had experiences of synchronicity you probably don’t need any further explanation why and how they are beneficial for your effectiveness in the world. Especially when you are working on dynamic and complex problems, you know that you cannot rely on your rational mind alone. Some of the problems are so complex, you cannot see how they could be solved at all and you know that you need to rely on luck and synchronicities. You don’t just want to sit and wait. You understand that these are factors not entirely outside your control but rather based on competences and behaviors that you can actually influence.

However, while you can control the circumstances, you cannot control the result when it comes to synchronicities. And that is also part of a larger shift towards a more feminine quality of trusting and receiving – as opposed to the more male quality of controlling and rationalizing.

So here’s what you can actually do engineer synchronicities and create the circumstances for them to occur on a regular basis:

1. Change your state of consciousness

In my own experience I noticed the important role my personal state of consciousness plays in experiencing synchronicities as a constant part of my life. States of consciousness are e.g. waking, dreaming, deep dreamless sleep and also include altered states of consciousness. These altered states can be induced for example by substances (e.g. psychedelics) or intentional practices (e.g. meditation). Broadly speaking anyone has access to these states regardless of their development, which distinguishes them from stages (more on them later).

And there is one state that I found to bring about synchronicities more than others: The flow state. There has been a lot of research done on flow states and I want to especially recommend the work by Steven Kotler  and the Jamie Wheal. They identified 17 Flow Triggers which help you to access this extraordinary state of consciousness. According to their definition, “Flow is the peak performance state where you feel your best and you perform your best.“

Generating flow states seems to me the most powerful thing you can do to increase the likelihood of synchronicities to occur and you can probably sum up all other hints in this article under this topic. Either this state helps you become aware of these non rational connections because you are more embodied and not just stuck in your head or your consciousness is actually interacting with your environment on a more intensive way. For more possible explanations, check out the podcast on the science behind synchronicities mentioned already above.

Whatever the scientific explanation why flow actually generates synchronicities is, the insights from Steven Kotler and Jamie Wheal are tremendously helpful in creating flow more often and you can find many resources on their websites (also check out their latest book – Stealing Fire).

2. Change your Stage of Consciousness

Other than states of consciousness, stages of consciousness are developmental attainments that humans can grow into. They are reflected by our behavior and values but also correlate with cognitive or emotional capacity. Ken Wilber distinguishes them by stating that “States are free, stages are earned.” Many of you are probably familiar with Spiral Dynamics or other models to map these stages of adult development.

In higher stages of consciousness certain states of consciousness are experienced more often or even permanently compared to lowered stages. My experience (and it might have been proven by research already – if you know about it, please share it in the comments) is that especially flow states are occurring more often once you have reached a certain stage of consciousness. In higher stages mapped in Spiral Dynamics, especially turquoise and above, intuition and larger collective awareness becomes more prevalent and therefore synchronicities also show up more often.

One of the most important things to grow healthily into the next stage of consciousness is to integrate all aspects of lower stages. This requires to seriously engage in deep inner-work, especially shadow work. Facing your own darkness will benefit you tremendously when striving for the light. You can find an example of my own shadow process here.

3. Aim for Synergies and Emergence

A synergy arises when you combine two or more elements in a way that new properties arise which the individual elements did not posses themselves before. This result is called emergence and leads to unexpected developments. An example is cells that don’t have the capacity for breathing. Once they form an organism it has this capacity. If we want to achieve the impossible, we need to strive for these unpredictable leaps in evolution.

One of the aforementioned flow triggers is a “rich environment”. If we can manage to surround ourselves with people and perspectives that are new and diverse, we increase our chances for serendipitous encounters and new solutions. Creating echo chambers on the other hand will decrease the chances for these emergent opportunities to arise.

To learn more about this fascination topic, I highly recommend another podcast epidosde with Daniel Schmachtenberger.

4. Expand your understanding of linear time

While this is not necessary to create flow, it can help to explore your understanding of linear time – one of the foundational assumptions (axioms) of our mainstream paradigm. For those of you that might be challenged by the idea of linear time as being a human construct and not necessarily a universal absolute truth – just take it as a thought experiment.

I won’t go much deeper into detail and only intend to spark your own reflection process on this: What if synchronicities are messages from the future?

From my own experience, I become aware of intuition as being a knowing from the future or a message that my future/higher self is communicating with me. My understanding is that time is not a linear function. Everything is happening all at once and therefore the threshold we perceive between past, present and future is not as solid as it appears in our rational minds.

If you’d like to be exposed to the idea of cyclical time, where the past and the future meet and influence each other in the present, I highly recommend to watch the movie “Arrival”:

5. Sync your rhythm with nature

There is a lot of wisdom to be gained from being and synching yourself with the frequencies of nature by spending time in the forest, around lakes, rivers and mountains.

If you learn how to move more in harmony with nature, you can adapt this movement to your everyday life, become more aware of your own rhythms and cycles and adapt your behavior accordingly.

Bring things in order before they exist.Lao Tse

By diligently looking at your life and clearing the clutter, cleaning up things that might be only small annoyances at this point but will become major stumbling blocks if you take up speed and energy, you make space for more life force to run through you.

One of the fundamental Hermetic principles is “As above, so below”. Whatever you observe in the microcosm can be observed respectively in the macrocosm. If you learn to read the different layers of reality, you can move in a way that invites more synchronistic events into your life.

Here’s another perspective to play with: Everything happens for a reason. If you adopt this perspective, you’ll become more aware of small signs and symbols in your life, even if they don’t make much sense from a rational point of view.

Once you somewhat suspend your rational control, you begin to act more intuitively. For example, if I cannot stop thinking about a person, I more and more follow that hunch and call the person. I notice how I become ever more subtle in my awareness and the importance that I attribute to these hunches.

These five pointers on how to increase the potential for synchronicities in your life are just short introductions and I could probably write a whole book on each one of them and how they are interlinked and interdependent on one another. I hope to have given you a bit of an idea on how synchronicities are not just beyond your sphere of influence but rather a phenomenon that aligns with your intention once you align with your purpose.